Online DDL: why FOREIGN KEYs are not supported

Online DDL: why FOREIGN KEYs are not supported

This post explains the inherent problem of running online schema changes in MySQL, on tables participating in a foreign key relationship. We’ll lay some ground rules and facts, sketch a simplified schema, and dive into an online schema change operation.

Our discussion applies to gh-ost, pt-online-schema-change, and VReplication based migrations, or any other online schema change tool that works with a shadow/ghost table like the Facebook tools.

Consider the following extremely simplified model. Don’t judge me on the oversimplification, we just want to address the foreign keys issue here.

Some analysis, rules and facts # 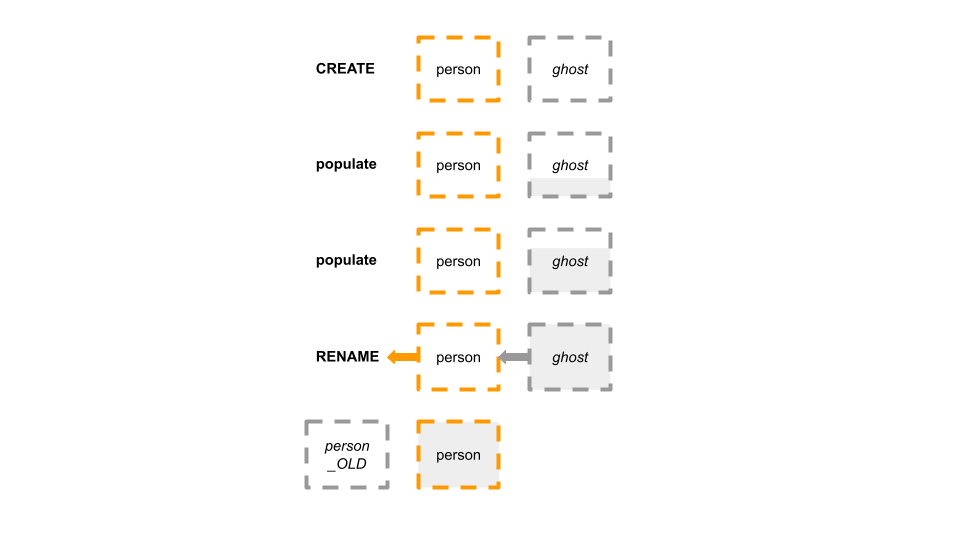 Say we want to ALTER TABLE person MODIFY name VARCHAR(1024) NOT NULL CHARSET utf8mb4. Or add a column. Or an index. Let’s see what happens.

What have ended up with? Take a look: 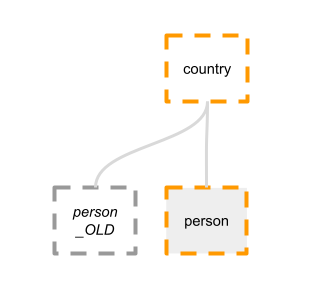 The table person_OLD still exists, and maintains a foreign key constraint on country. Now, suppose we want to delete country number 99. We delete or update all rows in person which point to country 99. Good. We proceed to DELETE FROM country WHERE id=99. We can’t. That’s because person_OLD still has rows where country_id=99.

Why don’t we just drop that old constraint? #

To drop the foreign key constraint from person_old is to ALTER TABLE person_old DROP FOREIGN KEY person_country_fk, i.e. an ALTER TABLE. That’s the very thing we wanted to avoid in the first place.

Why don’t we just drop the old table? #

pt-online-schema-change offers --alter-foreign-keys-method drop_swap: to get rid of the foreign key we can drop the old table. The logic it offers is:

Alas, dropping a MySQL table is production is a cause for outage. Here’s a lengthy discussion on the gh-ost repo. This is an ancient problem where dropping a table places locks on buffer pool and on adaptive hash index, and there’s been multiple attempts to work around it. See Vitess’s table lifecycle for more.

MySQL 8.0.23 release notes indicate that this bug is finally solved. Until everyone is on that version, DROP is a problem.

As pt-online-schema-change documentation correctly point out, we cause a brief time of outage after we DROP the person table, and before we RENAME TABLE _person_ghost TO person. This is unfortunate, but, assuming DROP is instantaneous, is indeed brief.

What happens if we naively try to ALTER TABLE country ADD COLUMN currency VARCHAR(16) NOT NULL? 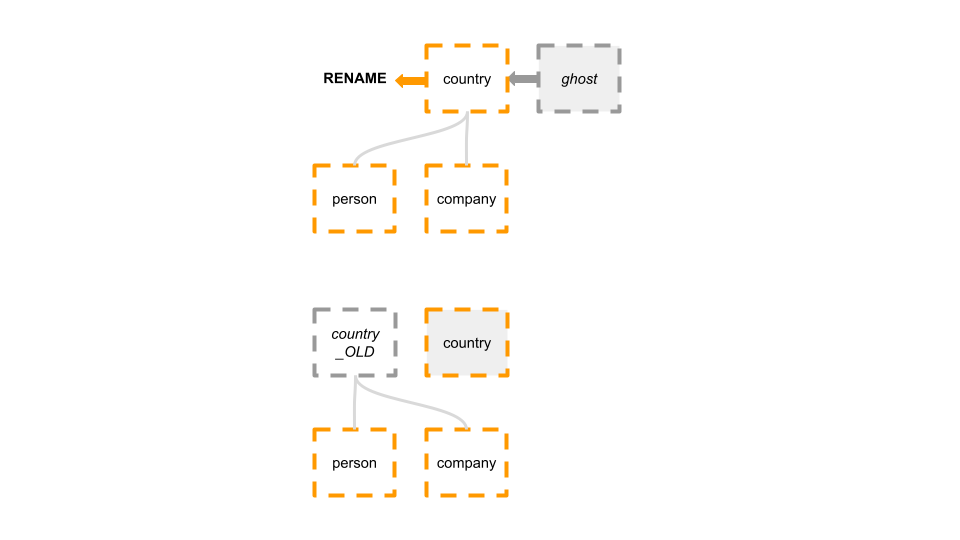 Our naive approach fails. As we RENAME TABLE country to country_OLD, the children’s foreign keys, on person and company, followed the table entity into country_OLD. We are now in a situation where there is no active constraint on country, and we’re left with a legacy table that affects our production.

Other than the DROP issue discussed above, this doesn’t solve the main problem, which is that we are left with no constraint on country.

That’s a lot to unpack.

How does pt-online-schema-change solve this? #

pt-online-schema-change offers --alter-foreign-keys-method rebuild_constraints. In this method, just before we cut-over and RENAME the tables, we iterate all children, and , one by one, run a straight ALTER TABLE on each of the children to DROP the old constraint and to ADD the new constraint, pointing to country_ghost (imminently? to be renamed to country).

This must happen when the ghost table is in full sync with the original table, or else there can be violations. For pt-online-schema-change, which uses synchronous in-transaction trigger propagation, this works. For gh-ost, Vitess etc., which use the asynchronous approach, this can only take place while we place a write lock on the original table.

As pt-online-schema-change documentation correctly indicates, this makes sense only when the children are all very small tables.

Let’s break this down even more.

Best case is achieved when indeed all children tables are very small. Still, we need to place a lock, and either sequentially or concurrently ALTER multiple such small tables.

Our experience tells that on databases that aren’t trivially small, the opposite is quite common: children tables are larger than parent tables, and running a straight ALTER on children is just not feasible.

Even the best case scenario poses the complexity of recovering/rolling back from error. For example, in a normal online schema change, we set timeouts for DDLs. Like the final RENAME. If something doesn’t work out, we timeout the DDL, take a step back, and try cutting-over again later on. But our situation is much more complex now. While we keep a write lock, we must run multiple DDLs on the children, repointing their foreign keys from the original country table to country_ghost. What if one of those DDLs fail? We are left in a limbo state. Some of the DDLs may have succeeded. We’d need to either revert them, introducing even more DDLs (remember, we’re still holding locks), or retry that failing DDL. Those are a lot of DDLs to synchronize at the same time, even when they’re at all feasible.

If children tables are large? #

In our scenario, person and company are large tables. A straight ALTER TABLE is not feasible. We began this discussion assuming there’s a problem with ALTER in the first place.

Also, for asynchronous online schema changes the situation is much more complex since we need to place more locks.

Can we ALTER the children with Online Schema Change? #

When can we start OSC on children? #

We want the children to point their FK to country_ghost. So we must kick the migration on each child after the parent’s migration creates the ghost table, and certainly before cut-over.

Initially, the parent’s ghost table is empty, or barely populated. Isn’t that a problem? Pointing to a parent table which is not even populated? Fortunately for us, we again remember we can disable foreign key checks as our OSC tool populates the child table. Yes, everything is broken at first, but we promise the server and the user that we will figure it all out at cut-over time.

So far, looks like we have a plan. We need to catch that notification that country_ghost table is created, and we kick an online migration on person and on company.

When do we cut-over each migration? #

We absolutely can’t cut-over country before person and company are complete. That’s why we embarked on altering the children in the first place. We must have the children’s foreign keys point to country_ghost before cutting it over.

But now, we need to also consider: when is it safe to cut-over person and company? It is only safe to cut-over when referential integrity is guaranteed. We remember that throughout the parent’s migration there’s no such guarantee. surely not while the table gets populated. And for asynchronous-based migrations, even after that, because the ghost table always lags a bit behind the original table.

The only way to provide referential integrity guarantee for asynchronous based migrations is when we place a write lock on the parent table (country). Let’s try that. We lock the table for writes, and sync up country_ghost until we’re satisfied both are in complete sync. Now’s logically a safe time to cut-over the children.

But notice: this is a single, unique time, where we must cut-over all children, or none.

In the best scenario, we place a lock on country, sync up country_ghost, hold the lock, then iterate all children, and cut-over each. All children operations are successful. We cut-over the parent.

But this best case scenario depends on getting the best case scenario on each of the children, to its own. Remember, an ALTER on a child table means we have to DROP the child’s old table. Recall the impact it has in production. Now multiply by n children. The ALTER on country, and while holding a write lock,  will need to sustain survive DROP on both person_OLD and company_OLD. This ie best case.

Less than best case scenario is unfortunately a disaster #

We don’t have the room for problems. Suppose person cuts over, and we DROP person_OLD. But then company fails to cut-over. There’s DDL timeout.

We can’t roll back. person is now committed to company_ghost. We can try cutting over company again, and again, and again. But we are not allowed to fail. During these recurring attempts we must keep the lock on country. And try again company. Did it succeed? Good. We can cut-over country and finally remove the lock.

What if something really fails? (hint: it happens) #

If person made it, and company does not - if company’s migration breaks/fails for whatever reason - we’re left in inconsistent and impossible scenario. person is committed to company_ghost, but company is still committed to country. We have to keep that lock on country and run a new migration on company! and again, and again. Meanwhile, country is locked. Meanwhile person is also locked. You can’t write to person because you can’t verify that related rows exist in country, because country has a WRITE lock.

Can’t stress this enough: the lock must not be released until all children tables are migrated. So, for our next challenge, what happens on a failover? We get referential integrity corruption, because locks don’t work across servers.

In a perfect world, we’d have all the disk space we ever needed. In reality we don’t have that luxury. Sometimes we’re not sure we have the space for even a single migration.

If we are to ALTER a parent, and as by product ALTER all of its children, at the same time, we’d need enough free disk space for all volumes of affected tables, combined.

Altering our 200 row country table ends up taking hours and hours due to the large person and country tables. The time for a migration is roughly the sum of times for all dependent migrations!

In our particular scenario we could get away with running a straight ALTER on country.

The operational complexity of Online Schema Changes for parent-side foreign keys is IMO not feasible. We need to assume all child-side operations are feasible, first, and we have almost zero tolerance to things going wrong. Coordinating multiple migrations is complex, and a failover at the wrong time may cause corruption

Truly, everything discussed thus far was a simplified situation. We introduce more complexity to our story. Let’s add this table:

person_company is a child of person and of company. It’s actually enough that it’s a child of one of them. What’s important is that now person is both a child table and a parent table. So is company. This is a pretty common scenario in schema designs.

How do you ALTER a table that is both a parent and a child? #

We introduce no new logic here, we “just” have to combine the logic for both. Given person_company exists, if we wanted to ALTER TABLE person we’d need to:

How do we alter country now? #

Throughout this complex process we have near zero tolerance to any failure in the above, and we can’t afford a failover during that time.